We believe in and support free trade! If you’re looking for a safe site to market your items freely as long as they are not dangerous or illegal, you can do it here!

Did you know that E bay & other online websites is now trying to erase a significant part of our heritage, culture and history? Yes it is! E bay has now made it so that sellers there can no longer market Black Americana items, this includes Mammy and other related Black Americana cookie jars! So far, E bay has been allowed to get away with stopping the sale of WW2 items such as Nazi paraphernalia as well as Ku Klux Klan items. Now, E bay will be allowed to get away with this, too??

BY BEING ALLOWED TO AND BY DOING THIS, E BAY IS IGNORING THE INTERNATIONAL LAWS OF FREE TRADE….THIS IS BREAKING THOSE LAWS BY RESTRICTING YOUR RIGHT TO SELL FREELY SINCE THESE ITEMS ARE NOT ILLEGAL OR DANGEROUS  BY NATURE OR DESIGN NOR WERE THEY EVER CLASSIFIED AS SUCH OR INTENDED TO BE. THEY ARE SIMPLY PART OF OUR HUMAN HISTORY.

We’re not in support of some of the activities or actions in our past, however, we’re realistic and know that the past is part of our history, culture, our heritage, our humanity and ignoring it is not going to change it. Without the past, there would be no present and the past has helped us be who we are today.  By letting it be, all these things can stand as reminders on how we can be better in our daily lives and socialization.  If we go so far as to allow preventing people to sell these items, we might as well tear down all the war memorials that have been built.

E bay thinks that by not allowing the sale of these items that history will just go away. They say that these items are degrading & offensive to some. Who are the “some”? The solution for those few is simple, JUST DON’T LOOK! Our best clients for Black Americana items have been black people. So, who are the “some” in this limited minority group that E bay & these other websites is responding to?

Like it or not, that part of our human history happened and by ignoring it is not going to make it go away.  These items are a significant part of our culture, our heritage, our past.  Let’s get real people and maybe if your voice is heard, E bay will do the right thing. Granted, not everyone is going to like it, but the few in that case are outweighed by the majority who agree with what we say here, however, we cannot change our past especially by ignoring it! These items don’t cause hatred or discrimination, people do.

WE ENCOURAGE YOU NOT TO PATRONIZE THESE SITES THAT ARE BREAKING THE LAWS OF INTERNATIONAL FREE TRADE!

Yes, Black Lives matter or BLM, but someone seems to be forgetting that not only do BLM, ALL LIVES MATTER OR ALM & this is how that should be advertised and not by advertising  JUST  this ridiculous BLM logo!! Singling out one particular issue or group helps to create more confusion, outrage and anger. Let’s get real people and understand that ALM, ALL LIVES MATTER and treat everyone this way!

ABOUT BRUSH & McCOY COOKIE JARS. You quite often and more often than not, see people selling their jars and listing them, for example, on E bay as Brush / McCoy. FYI, Brush and McCoy NEVER made a jar together. McCoy bought / owned Brush in its later years but never in the history of either company were they a combined business marketing cookie jars. The Winton Brothers designed jars for Brush, that’s why you see a “W” on the bottom of Brush Jars next to the Brush name. When the Brush company eventually stopped conducting business and selling cookie jars, the Winton Brothers opened their own company which became known as “Twin Winton”. Their jars were well known and respected and are in the top level of jars being sought by collectors today. 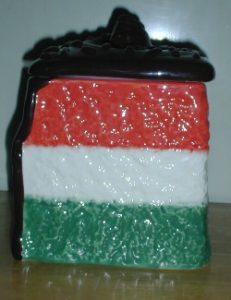 Offered for sale is this really neat "Slice of Neapolitan Cake" by ICJ cookie jars. Only 5000 of these jars were made!!  This jar reflects the passion of the family owned…